Northern Minnesota. Picture it. Lakes and woodlands. Prime hunting and fishing. The great outdoors. Premier cattle country. And the home to Wilde Angus Ranch, located at Shevlin. Wayne and Deb Wilde started their cattle operation in 1972 with commercial cattle. Over the years, they transitioned to registered Charolais and today the herd consists of nearly 650 registered Charolais and Angus cows, with their partner Don Abarr. In early March, Wilde Angus Ranch hosted its 24th annual “Salt & Pepper” Production Sale, and they are excited to see this year’s calf crop sell next year in their Silver Anniversary Sale.

Abarr describes the location of Wilde Angus Ranch as the “last frontier,” excellent cattle country with large pastures, lots of trees and topography where cattle can best do what they are bred to do. He said the water is plentiful, and the trees provide shade in the summer, but more importantly, provide protection from the brutal winters they experience.

“Winters are tough. We just endured a horrible winter, where it was 40 and 50 degrees below (zero) frequently,” Abarr said.

However, those harsh winters didn’t deter him from moving from two hours south a few years ago to combine his herd with the Wilde’s. The two families are in the transition phase, and he will eventually buy the Wilde’s herd and land. However, when the two families merged their herds, they did so with some challenges.

“We had some health issues because we had integrated my herd into Wayne’s herd. We went from 500 cows to 650 cows and that presented us some challenges on the health front because my vaccination program wasn’t consistent with his, and neither was my mineral program. We were looking around for opportunities, and that is how we got involved with VitaFerm®,” he said.

To help prevent further health challenges, Abarr and Wilde wanted to make sure their calves got the best start possible at weaning time, so they invested in the Vita Charge® Cattle Drench and the Vita Charge Stress Tubs to get them started on the right track. Abarr said the results were tremendous.

“Through the course of last summer and early fall, we ran the Vita Charge at weaning. We started with the Drench and ran it through almost every calf. We only treated four calves (out of nearly 600) the entire fall season. They really responded well to the usage of the product and started eating right away. We ran the Stress Tubs on top of that, so we really went all-in, and really had tremendous results. We deliberately didn’t give the Vita Charge Drench to a few calves to run our own experiment, and you can see the difference right away. The first 10 days after weaning, those calves go backwards, that’s a 30-pound differential and that translates into real dollars. That made me a believer,” he said.

After the calves are weaned, they have two specific development programs – one for the bulls and one for the replacement females. The target goal is for the bulls to gain 3.25 pounds per day. From weaning through February, Abarr weighed the bulls every 30 days and was pleased with the results.

“With the usage of the mineral and the fast start that they got, out of 170 bulls, we had six bulls not gain at least 3 pounds per day. The rest were 3.80, and I had a huge number of those calves that were up over 4 pounds, so they just really excelled in performance. It’s been tremendous. We’ve been very happy with the Vita Charge,” he said.

Although Abarr said overall health and performance were the two most noticeable benefits he saw to the Vita Charge products, the weaned calves seemed more consistently uniform since he added the Vita Charge to their nutrition program.

“Even some of the smaller, younger calves were able to accelerate. Those calves were consistently healthy, ate well and really shined at the end.”

And with success like that, the ranch partners decided to carry the nutrition program over to their cow herd. The mother cows are now on VitaFerm Concept•Aid® Balancer, and Abarr said the calves have hit the ground healthy with no challenges, despite the bitter temperatures and feet of snow they’ve had this winter.

“You go through our calves right now, and you won’t find a snotty nose anywhere. It’s crazy. It’s almost too good to be true,” he said.

A good nutrition program is what it took to get these combined herds straightened out. And with an investment in a good mineral program, Abarr and Wilde are not paying for medicine to treat sick calves, the time and labor to treat them or the time for calves to get back to eating and gaining. 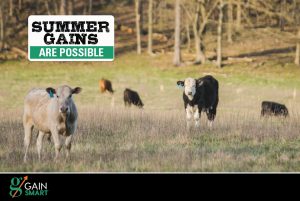 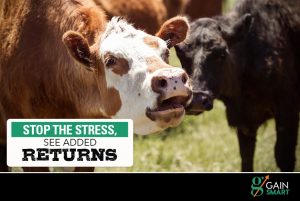 Stress. Anxiety. Tension. All of these are emotions that cattle producers deal with during their daily routines. Add pens of stressed-out bawling calves yearning for their mamas, and that tension might even escalate for a week or so at weaning time. What if there was a product that could keep your weaned calves healthier, jump-start […]