Anthony Schmidt understands the value of a good investment in his herd health protocols. Last fall he was shopping for a less expensive nutrition program that could enhance the health of his calves, and he found Gain Smart® just in time.

“It’s been a challenging six to seven months at the feedlot with rain and ice throughout the fall, at Christmas and all winter. We’re used to feet of snow during the winter, but we have had very little snow, and the health of our cattle is very good considering the adverse conditions we’ve experienced this year,” Schmidt said.

He said since he started feeding Gain Smart Balancer RU1600 last October, he has treated a lot fewer sick calves compared to a year ago, while his vaccination protocols have remained the same. He previously fed BioZyme® products when he worked at a dairy, and he knew the benefits they offered in keeping cattle healthy. So when Gibbon Farm & Ranch near Milnor, North Dakota, started looking for a more cost efficient supplement option, Gain Smart seemed like a good investment for their operation.

“Since we switched to Gain Smart and distiller’s grain we have seen a big cost savings, added gain and improved the health of the calves in our operation,” Schmidt said.

Gibbon Farm & Ranch, where Schmidt is the Cattle Manager, will peak at about 4,000 head of cattle at one-time, including their own cow-calf operation, custom cow-feeding more than 2,200 gestating cows, a 1,000-head feedlot and a backgrounding operation.

Schmidt said though they don’t weigh their calves at weaning or when they enter the feedlot, he was pleased with their weight when they left the feedlot this January, after about three months on Gain Smart.

“Our spring-born calves were on grass all summer with no creep feed. We weaned them September 20, and started them on Gain Smart. When they left in early January, they averaged 983 pounds,” Schmidt said.

Gain Smart is a supplement program developed to promote general health and gain in backgrounding and yearling cattle, and like all BioZyme products, includes Amaferm® is a natural prebiotic designed to maximize the nutritional value of feed. 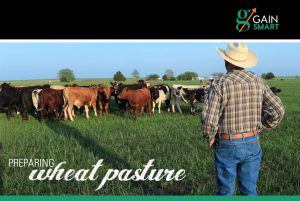 Cattle producers across the Great Plains and throughout the country often rely on wheat pasture to graze their cattle in late fall and through the winter. However, with less than ideal planting conditions in many regions this year, wheat is getting planted later than usual, which will impact the amount of forage available to cattle, […]

Freshly weaned calves are already fighting a compromised immune system. Combine that with shipping them on a semi for several hours and commingling them with other groups of calves you’ve purchased elsewhere, and their health system is compromised even further. However, you can implement these best management practices to make sure your stocker calves stay […]