Changing just one management decision can increase gain, and gain increases profitability. Just ask Ray Fussell. The Tennessee Ridge, Tenn., stockman has been buying stocker calves and backgrounding them for 20-plus years. And after he shipped his 2017 calves, his cattle buyer suggested he look into changing his mineral program. So he did just that.

Fussell said he buys 500-pound, mixed lot calves at the sale barn each December and grazes them through July before they are sold and shipped to a feed yard in Nebraska. The calves run on grass and are fed weekly. He said the same person has bought his calves the last several years with good results, but in 2017, a higher than expected death loss occurred after shipping the calves to Midwest, most likely related to heat stress associated with fescue toxicity, even though they appeared healthy prior to shipping. Therefore, the recommendation for a new mineral program was made.

Prior to buying his next group of calves, Fussell started his research. With the “magic of Google” he found a product called VitaFerm® HEAT® mineral and reached out to a BioZyme® Inc. representative about the benefits of the HEAT mineral. In the meantime, BioZyme introduced Gain Smart® Stocker HEAT®, specifically formulated for stocker cattle, and Ken Gillig, Inside Sales Coordinator, informed Fussell that his local co-op would carry the Gain Smart HEAT. Fussell said adding this mineral to their diets is the only change he made this year compared to the past, and the changes were noticeable at shipping time. Even his buyer noticed when he came to load and ship the calves one Friday in late July.

“I weighed my steers on Friday, and we could see and measure the results from the Gain Smart HEAT mineral. The buyer was really impressed with their appearance. The cattle arrived at the Nebraska feed yard Saturday morning in great shape – shrunk less than 7% and every calf came off the truck in great shape,” Fussell said. “Most of the yearlings in the area have been going to the same yard for several years, and they figure on losing 1-2 on every load. With these results, I hope to be able to ask for a little more for these cattle on Gain Smart next year.”

Fussell said although the southeastern type cattle are not really uniform in their type and kind, they are similar from year-to-year. The calves he shipped this year gained 24 extra pounds over the calves he sold a year ago. But the biggest difference was with the lower end. He said he normally feeds 135 head on a particular farm, and typically will have a group of 20-25 “sort-offs” that are 50-75 pounds lighter than the rest of the group that weighs 850-875 pounds. After switching to Gain Smart Stocker HEAT, his results were noticeably different.

“This year I only had three head that were so small they didn’t match. The other 132 averaged 901 pounds. I’ve been running pretty much the same cattle for 20 years on this place, and they have never averaged 900 nor had that few to sort off. With the better performance at home, and lower death loss during transport and the 48 hours following arrival, the extra cost over our previous mineral program was a good investment. These results were good enough that we will be feeding Gain Smart HEAT to all our steers the remainder of the summer and next year,” Fussell said.

Gain Smart Stocker HEAT is a free-choice vitamin and mineral supplement for stocker cattle designed to balance basic nutrient needs for maximized efficient gain on grass pasture. The HEAT component contains capsaicin to help maintain circulation to support animal performance and gain in both heat and fescue situations. Capsaicin is research-proven to support animals’ ability to maintain normal body temperature. This mineral also includes garlic, to deter insects.  All BioZyme products contain Amaferm®, a precision prebiotic designed to enhance digestibility by amplifying the nutrient supply within for maximum performance. It is research-proven to stimulate digestion and nutrient uptake of forage for optimum gain as well as maintain performance during heat stress. 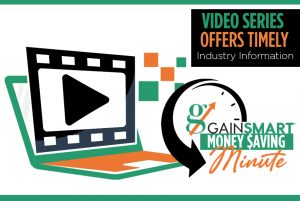 Time and money. The two things are precious commodities to those in the cattle business. There never seems to be enough of either, but with the new Gain Smart® Money Saving Minute, cattle feeders can learn valuable information about how to increase their bottom line in just a few short minutes a month. Launched in […] 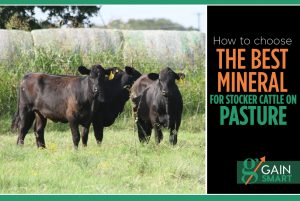 When it comes to backgrounding your cattle and keeping them healthy, there are a lot of choices that exist. All of the options might make your head spin, but look no further than the Gain Smart® line to produce healthy, efficient pounds.   Gain Smart is a line of vitamin and mineral supplements for beef cattle with the Amaferm® advantage that promotes […]