Cattle feeding is a precarious business, especially when you’re getting in high-risk cattle and hoping to put as much gain on them as you can in about 120 days. A father-son joint venture between Chad and Coleman Ladd, 2CL Feeders LLC, in Madisonville, Kentucky, has found that supplementing their calves with a premium nutrition program has helped increase both their overall health status and average daily gain, a double win.

“It’s been a pleasant change. We’ve drug them (calves) and buried them for years. We don’t look forward to October, but the Amaferm® and this year’s weather has made a big change. Around here, October is national ‘Dead Calf Month’,” said Chad Ladd, one of the partners of the backgrounding operation.

Ladd said that he had experienced some great gains in his calves due to the Amaferm in the Gain Smart® mineral he had previously fed, but realized he needed more than just a mineral and some forage for his calves that he gets in at between 400 and 600 pounds. He wanted to convert them to a total mixed ration. So, he created a ration with wet distillers, straw, hominy, soy hull pellets and Amaferm, which is included in the TMR in a pelleted form.

Amaferm is a precision-based prebiotic that impacts intake, feed digestibility and nutrient absorption for optimum health and performance. It is easy-to-use either top-dressed or mixed in the ration and unlocks valuable nutrients regardless the quality or type of feed.

His calves are also getting additional doses of Amaferm upon arrival or anytime they go through the chute. When he processes a new load of calves, they all receive a dose of the Vita Charge® Cattle Drench. They also get a dose any time they are in the chute for vaccinations or treatments. The Vita Charge Cattle Drench supports digestive health and promotes feed and water intake during times of stress and recovery. Conveniently designed for processing large groups of ruminating cattle, the Drench contains Amaferm, organic trace minerals and essential vitamins to stimulate the immune system and to ensure that feed intake stays consistent. Added enzymes work with Amaferm to generate a more rapid digestive response.

Ladd rounds out his nutrition program with the Vita Charge® Stress Tubs, ensuring that every new pen gets two tubs for their first few weeks on feed at his lot. The Stress Tubs also contain Amaferm and a heat tolerant probiotic to work synergistically with Amaferm to replenish and stimulate gut bacteria, as well as MOS to trap bad bacteria limiting their ability to do harm. The Stress Tubs include organic Zinc, the antioxidant Vitamin E and B vitamins. Both the Drench and Stress Tubs are formulated to help animals recover quickly and do not interfere with antibiotics.

“We just sold a load this fall that we got in this summer. They were bulls coming in around 600 pounds. We cut them. They were here 87 days or so. They gained 3.08 pounds per day, and our death loss was minimal. We lost two head and one was to bloat. Our death loss has been nothing – one or two from each pen. Our pulls have been minimal. Starting them on those Stress Tubs and Drench helps significantly,” Ladd said.

When you’re trying to turn a profit and run 1,500 to 1,800 calves through your feed yard each year, you’ll put forth the effort to start those calves on the right foot. And that starts with a good nutrition program from day one.

“We try to hit them hard because it is high risk cattle that we buy,” Ladd said.

Don’t take a risk with your calves’ health. Jump start their digestive health that leads to increased gains with Amaferm. 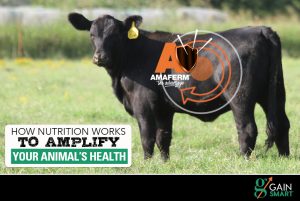 Health and nutrition. To some livestock producers these terms might seem like the “chicken and egg” expression, and leave you wondering which one came first. Do you amplify your nutrition program to get your animals to perform to their highest potential? Or does a high-quality nutrition program help keep your animals healthy and therefore performing? […] 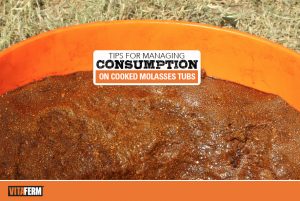 Cooked molasses tubs, like the Vita Charge® Stress Tub, VitaFerm® 30-13 Protein Tub, and the VitaFerm® Concept•Aid® Protein Tub, are convenient and cost-effective cattle supplements that help producers enhance animal performance and limit waste. However, to truly maximize their cost-effectiveness, proper consumption management is essential. The easiest way to avoid over or under consumption is to follow […]