It’s the middle child of the cattle business. You’ve likely heard of the stocker operator, but maybe you aren’t really familiar with just what he or she does for the cattle industry. The cattle business is typically broken into three distinct segments: the cow-calf enterprise, stocker operators and feeders. Most people are familiar with the first and last phases: cow-calf producers are visible at sales and with their newborn calves along country roads. The feeders are also fairly obvious, with massive feedlots full of cattle growing to become a protein source to feed the world. But what do we know about the stocker operators? Like the typical middle child of the cattle business – we know they exist, but what is their role?

Stocker operators, also known as backgrounders, play a pivotal role in the beef business, growing young, recently weaned calves to the point where they are ready to enter the feed yard. Stocker cattle are fed anywhere from 300 to 850 pounds and can be calves or yearlings when they then ultimately enter the third and final phase – feeding and finishing.

Stockers will typically buy calves at weaning or a few weeks post-weaning to background for 2 to 8 months. During this time, their focus is to grow these young calves as efficiently as possible, either with the use of native pasture, wheat or other small grain pasture or grain. Typically, the stockers have ample land resources available, but prefer to feed calves for a short turn around rather than produce cattle.

One of three feed resources are usually used during the stocker phase. Grazing forages is the least expensive way to put pounds of gain on a group of cattle. You can expect calves to gain about 1.5 pounds per day when on grass, with proper supplementation. This is especially popular during the late spring through the early fall. However, in some regions like the south and southeast, growing seasons allow for grazing pastures year-round.

Throughout the wheat belt, grazing wheat pasture has proven to be an economical source of high-quality nutrients during the winter and spring. Wheat pasture can generally be grazed from November through April, with many calves posting around two pounds of gain per day.

The final method of growing calves is feeding them grain. Although this method is the most labor intensive and cost prohibitive, it does offer its advantages. In areas where forages are limited, as in cases of drought, this is the most effective way to add pounds. It also allows the stockers to divide the feeding groups by weight, breed type or color and sex, making feeding and ultimately marketing more efficient.

Many cow-calf producers realize the necessity and the value of preconditioning their calves before marketing them into the next phase. Preconditioned calves are generally healthier and more efficient gainers during the backgrounding and feeding phases, while experiencing less sickness and death loss. Preconditioning is the 45 days from weaning to marketing when the calves are vaccinated, dehorned, bunk broke and quieted before shipping them to a new environment.

Regardless of your stocker operations’ feeding scenario or if you buy preconditioned calves or fresh-weaned calves, nutrition plays an important role in the overall health and performance of your calves’ success during the stocker phase. The Gain Smart® Program is a three-step approach to keep your calves healthy and gaining while keeping them on your program.

The first step of the Gain Smart program includes giving calves Vita Charge® Cattle Drench upon arrival. The Vita Charge Cattle Drench provides a jump start to the digestive system to protect cattle during stress. This product is formulated to help cattle recover quickly and does not interfere with antibiotics. Like all products in the program, it includes Amaferm® a precision prebiotic designed to enhance digestibility by amplifying nutrient supply for maximum performance. It is research-proven to combat stress by supporting the animal’s own immune system, significantly increasing intake and nutrient utilization.

Next, introduce the Vita Charge Stress Tub to the calves the first 2-3 weeks after the calves have arrived. The tub will promote feed and water intake, increase digestibility to maximize the energy value of the feed for more gains. In addition to Amaferm, the Stress Tub now contains a heat tolerant probiotic to work synergistically with Amaferm to replenish and stimulate gut bacteria. It also contains MOS, which helps trap bad bacteria limiting their ability to harm the animals.

The final step in the Gain Smart Program is the introduction of one of the four mineral options available. The mineral should be introduced to the calves immediately. It works hand-in-hand with the Stress Tub, and the Stress Tub can be removed once the calves have a healthy eating routine established.

Stockers and backgrounders should not be the forgotten middle child of the cattle industry. They play a pivotal role in growing young cattle and getting them ready to convert feed to muscle, which ultimately becomes protein to feed the world. 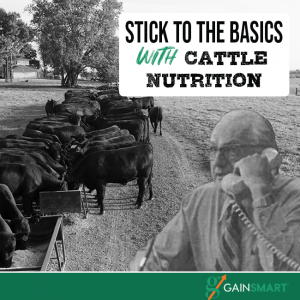 Second in a Series based on 1980s Ads Featuring BioZyme® Founder  “To get more out of this business than you put into it, stick to the basics.”   Those were the wise words spoken by BioZyme® Inc. founder Larry Ehlert in a 1980s advertising series. As we start a new year, where everyone is thinking about […] 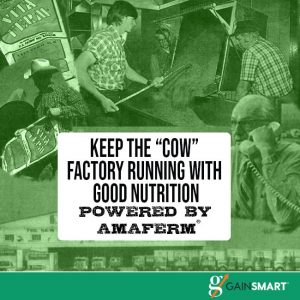 “This is one of the most efficient factories on earth. And we can help you keep it that way.”   That quote isn’t about an auto manufacturing plant. Or even a widget factory. It is about something we are all more familiar with – the cow. Even back in the middle part of the 20th century, […]